Michael grew up in the West Grove a in a household where the word ÒRotary” was frequently heard. His father, Frank M. Perna, was a Rotarian for many years in the Rotary Club of Kennett Square. Perna practiced law in the area, and so he inspired Michael not only to be a Rotarian but to follow him in his career as well.

Michael attended the Salesianium School in Wilmington and then went on Villanova and Temple University where he received a Bachelor of English degree “with distinction” in 1976.

He received his Juris Doctor degree from St. Mary’s School of Law in 1979, where he was a member of the Law Journal and published in the field of consumer lending. In 1984, Michael received a Master of Laws degree in Transnational Business and Taxation from the University of the Pacific McGeorge School of Law, after completing advanced studies in public and private international law at the University of Salzburg in Salzburg, Austria.

Michael began his legal career as an attorney with the Commission of the European Economic Community (the “Common Market”) in Brussels, Belgium, where he concentrated on transnational commercial issues. In 1982, he joined the staff of Mountain States Legal Foundation, and was lead counsel in public interest litigation brought in various state and federal courts, as well as the United States Supreme Court, in the areas of constitutional law, public lands and Indian affairs.

Since 1985, Michael has been a partner in the firm Rigler, Perna and Vosburgh, a firm which was founded by his father Frank Perna, and Earl Rigler, a fellow Rotarian, in 1949. He concentrates on personal injury litigation, estate matters, complex real estate transactions, domestic issues and business litigation.

Michael has been active in the southern Chester County community, having served as co-founder, director and president of Kennett Run Charities, Inc., and as president and director of the Rotary Club of Kennett Square and the Kennett Rotary Foundation.

His Rotary distinctions include being named a Paul Harris Fellow. He has also served on the boards of the United Way of the Kennett Area and the Southern Chester County Chamber of Commerce, as well as other community-based charitable endeavors. Last year, Michael was instrumental in the formation of the new breakfast club, the Rotary Club of Kennett at Longwood. Congratulations to Michael Perna, Rotarian of the Year! 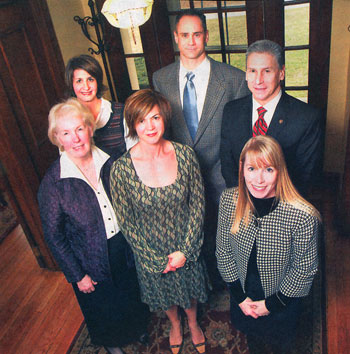 If you have a specific legal question that you would like answered without any obligation to retain our firm, please ask below and one of our attorneys will respond within 48 hours at no cost.
Schedule a Complimentary Consultation

Talk to Us Now!

Our team is ready

Reach us with your questions or concerns by filling out the form. Someone from our firm will reach out to you within 48 hours. If you are concerned about confidentiality and would rather speak to us in person...

Just call us at

For legal representation in Southeastern Pennsylvania or Northern Delaware